We Need Freedom of Movement (URGENTLY).

I suppose almost all of you read this article at home, since governments of major countries ordered you to stay home as preventive measure against COVID-19. Being forced to do so, you must feel rather nervous and frustrated to see the situation seems to never have become better than before. Actually, the wide spread of COVID-19 virus is accelerating, and even “experts” can’t exactly forecast when it will come to an end.

From my viewpoint, what we shall do is to be much more realistic in this regard. The crisis of“Black Death” in 14th Century continued from 1348 to 1371 (23 years!), and it killed one fourth of the then whole population in Europe. This unprecedented infectious disease led the people to change their mindset, thoughts and behavior entirely, which is now called “Renaissance”.

The point is who survived despite the “Black Death” and enlarged their powers in the new era? In this context, we shall remember the name of “House of Medici”, which brushed up the European financial system from the medieval and succeeded to acquire its own dominant position. How could the House’s members save their life?? The answer is quite simple: They just moved to other places as soon as they were informed affected individual of “Black Death” was found near their tentative residence. In short, their policy was “Go away and save life”.

Having said that, the above-mentioned current governmental policy against COVID-19 virus can’t fully persuade me to stay at home. Of course, all of us shall follow the authorities’ instruction for prevention in our daily life, such as “washing hands carefully” and “gargling thoroughly”. However, nobody can’t guarantee the place where you’re right now isn’t polluted with the virus. And as long as no single appropriate vaccine will be produced and distributed to the public, you always face the same risk, wherever you are (Sorry, but this is the fact you can never deny.). The only way out for you is just to go away from the place where affected persons are found, to another place where the risk seems to be minimum (at least at this juncture). All the governments can’t accept this prudence of House of Medici “Go away and save life”, since this surely cause massive waves of migrants even beyond borders and inevitably collapse of nation states. Thus, the governments repeat their “noble lie” that you shall stay at home to prevent from further spread of COVID-19.

If the global leadership and your governments’ leaders really want to suppress the pandemic most effectively, they shall focus on not such a pseudo-physical measure but immune system of human body. To your surprise, almost nothing about human immune system is medically known, and we’re urged to both globally and jointly take appropriate measures to elucidate its nature. To make it happen, a comprehensive genome analysis in terms of both COVID-19 virus and affected individual’s bodies has to be done immediately by using ultramodern supercomputers. That’s why I recently appealed to the public Japan-made supercomputer should be highlighted in this regard. When you would succeed to find out how to enrich immunity of human body completely, you don’t need to stay at home in principle, and can instead go away to wherever you like. The current quarantine policy shall be understood only as a tentative one.

There is another reason of immense scale for following “Go way and save life” principle, particularly in East Asia. Recently, the expert committee of Government of Japan released its analysis on future eruption of Mt. Fuji, the biggest symbolic mountain in Japan, which almost stunned the Japanese public opinion. Through this channel, I want to rather highlight it not Mt. Fuji but other big mountains such as “Mt. Paektu (백두산／长白山)” in DPRK that acutely matters according to media reports since the last year. Once the volcano would erupt abruptly, it would discharge ten times amount of volcanic ash by the eruption of Eyjafjallajokull in 2010 in Iceland (“Millennium Eruption”!!). The eruption as such won’t cause disaster, but unprecedented crisis may take place afterwards. Heavy rain on facilities of power generation and transmission with immense amount of volcanic ash immediately leads to total “blackout”. And sudden lackness and extreme shortage of electricity stop almost all the activities of modern civilization. And you’re forced to choose either to stay at home without electricity, or to go away and save life by finding out a place where you can get connected to sufficient electricity. 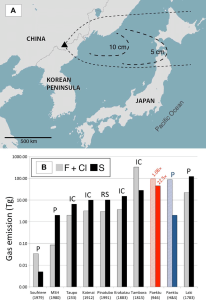 Unprecedented crisis one after another. I firmly believe it’s the high time for all of us to contemplate how we should change our previous mindset produced with “modernity” after Renaissance. Only when we’ll make up our mind to get rid of one thing, we’ll be able to get a new and appropriate one. What instead of “modernity”? That’s the ultimate question we have to urgently solve together. Stay tuned.